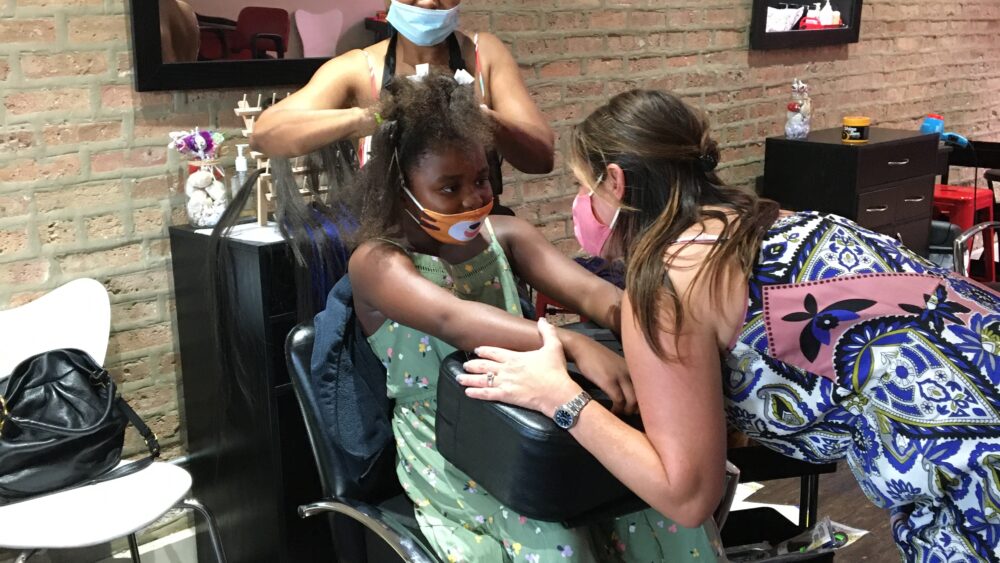 Tamekia Swint is passionate about serving her community. She is the founder and executive director of the only non-profit of its kind, Styles 4 Kidz, that has just relocated to 235 Harrison Street in the Oak Park Arts District. Styles 4 Kidz provides “Hair Care with Heart” through its two-fold social mission: to create hairstyles that boost the self-confidence and self-esteem of children with textured hair and to teach parents the skills they need to manage their children’s natural hair at home.

Tamekia grew up in Chicago and attended the University of Illinois to study community health. “I had always loved hair, but I never considered doing it professionally. That idea wasn’t accepted in my family. I was supposed to go to college and then get a job,” says Tamekia. As a way to support herself while in school, she decided to learn how to do hair, enrolled in a program at Olive-Harvey, one of the City Colleges of Chicago, and spent a year commuting twice a week between Champaign-Urbana and Chicago.

After college, Tamekia worked at a salon, got a job with the State of Illinois as a parole agent, went back to school to earn her MBA at National Louis University, and worked for Allstate Insurance. But it was a mission trip to Poland to teach English for two weeks that changed her life. One of the leaders asked her to teach an elective and so she taught what she knew how to do: hair. “I hadn’t brought any tools with me, but they gathered what they could and I taught everyone how to braid. And I was struck by one girl who told me that she had always dreamed of having these beautiful braids. I came home wondering if maybe there are girls here who dream of having these beautiful hairstyles too.”

So she made up some flyers and started handing them out at beauty supply stores and slowly built a clientele while continuing to have a vision of “hairbraiding missions” in the community. One Sunday at church, Tamekia noticed a woman and her daughter who had beautifully braided hair. She felt an urge to talk to her. “I went right up to her, introduced myself, and handed her my card. I told her that her daughter’s hair was beautiful so I didn’t think she’d ever need my services, but I was here to help just in case. She replied that she didn’t need my help, but she knew somebody who did and she would have her call me on Monday.”

“Mary called me and my life has never been the same.” Mary had adopted two African American girls, was struggling, and needed immediate help. “It was really bad,” says Tamekia, “but it was fixable.” It took a year of working together every two weeks to get the girls’ hair healthy. At the time, “natural hair was not as accepted as it is now and so there was not a lot of information out there about how to care for it.” Word about Tamekia spread and she soon learned that “Oak Park is a tight-knit community where multiculturalism, transracial adoption, and biracial families are all embraced. This became my community.”

Before long, Tamekia resigned from her insurance job and established a non-profit called Styles 4 Girlz in October 2010. “People tried to convince me that you don’t do hair as a non-profit, but that was my vision. It had a social mission.” The name has since been changed to Styles 4 Kidz to better reflect the children they serve. A few years ago, Tamekia realized that they needed a physical location. “It was hard for me to communicate to people what we were doing and to get donors. People didn’t understand the concept without a location.” When she first started looking for a space to rent, Tamekia wanted to be in the Arts District, but there was nothing available in her price range. So it feels serendipitous now that the perfect space on Harrison Street became available just as they were outgrowing their original location on Lake Street.

While the front room of Styles 4 Kidz looks like a salon, “the level of care that we give each child is different than what you would find in a typical salon,” says Tamekia. “Some of the kids who come here have really damaged hair. We work with them to get the hair healthy. We’re all about nurturing that child and that family.” Eighty percent of the families that Styles 4 Kidz serves are transracial adoptive parents, transracial foster parents, or biracial families. Through workshops and one-on-one coaching, these families are learning skills and building a community. “The kids get a cultural connection in the salon. They see other kids who look like them and other families that look like theirs,” says Tamekia.

Kelly Biggs is thrilled to have found Styles 4 Kidz for her 8-year-old daughter Harper. “We had been to other salons and it was nothing but tears. Coming here is a fun experience and there is a nice community feel. I appreciate everything they do to serve transracial adoptive and biracial families.” In fact, Harper was so happy with her experience that she recently raised $50 from a lemonade stand that she donated to the organization.

“Our budget for this year is $300,000, but COVID-19 has presented a challenge for us,” says Tamekia. Their fiscal year ends on October 31 and while they are close to reaching their goal of serving 600 children, they are only about 60 percent funded. While half their budget is from donations, the other half is from the below-market fees that they charge for services and workshops. “Being shut down for over two months in the spring was hard.” Despite this setback, Tamekia is still hopeful and is looking forward to November 2021 when they will be able to celebrate the delayed 10th anniversary of Styles 4 Kidz.

Tamekia Swint and Styles 4 Kidz can be reached at 708-434-5680. To learn more about scheduling an appointment, attending a workshop, or making a donation, visit their website at www.styles4kidz.org. 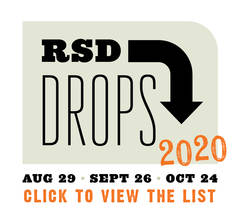 Record Store Day(s) 2020 is happening and here's how Val's is working it: "In order to follow distancing guidelines, we cannot allow people to line up outside of the store.

Record Store Day(s) 2020 is happening and here’s how Val’s is working it: “In order to follow distancing guidelines, we cannot allow people to line up outside of the store. Instead, we will have 25-minute time slots booked for 8 customers at a time and there will be a lottery for those slots. This is being done in conjunction with guidance from Record Store Day. Visit https://valshallarecords.com/record-store-day-drop-1-08-29-20/ to sign up for a spot in the lottery, The lottery will be held via Zoom on Wednesday, August 26 at 7:00 pm. We will send a link to join the live pull and we will try to make this a fun event. If you can’t make it, we will email the results later that evening. We will also have lots of great specials going on to celebrate. If you have any questions, contact us at (708) 524-1004.”

Take 20% off your tab dining during Senior Night at Trattoria 225. Good for delivery and curbside pick up.

Take 20% off your tab dining during Senior Night at Trattoria 225. Good for delivery and curbside pick up.

Work on your projects in the company of friends; laughing, talking, relaxing and building community. Best for adults and mature teens. Fiber Fun Night may not run if the date

Work on your projects in the company of friends; laughing, talking, relaxing and building community. Best for adults and mature teens. Fiber Fun Night may not run if the date overlaps with a holiday.

Join us for Fiber Fun Night every Wednesday 6-9pm. Community is everything!
Get “out of the house” and in the comfort of stitchers and creators like you!
Sign up for our Zoom video conference invitation here https://dyehardyarns.com/pages/new-covid-19-shelter-in-place-services