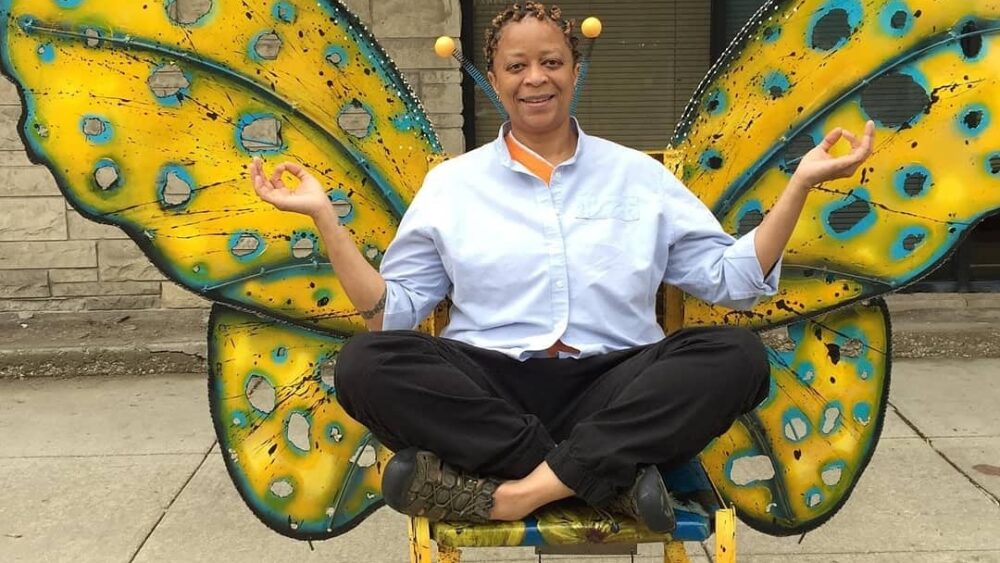 Spreading Her Wings on Harrison Street

After more than 30 years as a professional artist, Tia Etu of Whatever Comes to Mind Studio feels like she has finally arrived. “Of course, I want to arrive higher than this,” she laughs, “But 2021 has been a good year.”

Growing up in the Chatham neighborhood of Chicago, Tia had a troubled childhood. “My mother was mentally ill and I was on my own a lot. Sometimes I was sent to live with relatives. Once in junior high, I had done something wrong. I was sent to the office where they asked me to draw a picture of Mickey Mouse for the bulletin board. They liked my drawing and from then on, art is the thing that kept me OK. No matter what, I had this thing that I was good at. And people praised me for it,” says Tia.

When she was a senior in high school, Tia’s counselor got her a scholarship to the School of the Art Institute of Chicago. “College hadn’t even crossed my mind. But that’s how I wound up really serious about art.”

Wanting the best for her biracial son is what brought Tia to Oak Park in the 1980’s. “I didn’t want him in an all-black neighborhood or an all-white neighborhood, but I knew in Oak Park that he would fit right in,” says Tia. At that time, the Oak Park Arts District did not exist as it does today. “There was a live/work space available at 11 Harrison Street and I applied for it. I was surprised when I got it, but it was great space. Unfortunately, I struggled to make a living and then the building was sold and I had to move.”

It was only about 10 years ago that Tia returned to the Arts District when she opened her current studio at 27 Harrison Street. “The first couple of years it was a struggle, but then I started getting more commissions. And it kept growing and growing. And now I’m finally getting to a place of being respected enough that I haven’t looked for one job that I’ve had recently. They have all come to me,” says Tia.

Earlier this year, Tia had a mural unveiled at the Walmart at 4650 W. North Avenue in the Austin neighborhood of Chicago. The mural is called “Generations” and was selected as part of the Walmart Community Mural Program. It features the iconic “Pink House” that has been a neighborhood landmark for more than 30 years.

More recently, Tia completed her largest and highest-paying mural to date. It’s located at 810 Beloit Avenue in Forest Park and took her about three weeks to complete. “The owner of the building wanted something with movement that was colorful and playful,” says Tia. The result is “Imagine” and depicts three goldfish swimming against a background of clouds.

Closer to home, Tia has been brightening the front of her studio at Humphrey and Harrison with a floral sculpture garden. “I started the first garden because nothing would grow there and so I decided to make some flowers out of metal. Now things grow like crazy,” laughs Tia. Her newest addition is a bright orange flower made out of a “Road Construction Ahead” sign. “I had the sign for several years, but I finally cut it and got it ready. I always wanted a flower made from a reflective sign and I couldn’t be happier with it.”

Looking to the future, Tia would love to complete a building-size mural. “The idea scares me to no end since I have problems with heights. But before I leave this earth, I would like to do one huge mural.” She is also hoping to bring her metal flowers in larger-than-life form to the Morton Arboretum.

Although Tia works in a lot of different mediums and has a lot of different styles, “they all look like me,” she says. “That’s why my business is called ‘Whatever Comes to Mind.’” To see more of Tia’s paintings, drawings, murals, sculptures, and jewelry, visit Whatever Comes to Mind Studio at 27 Harrison Street. She can be reached at 708-299-2878 or through her website at www.whatevercomestomind.com.