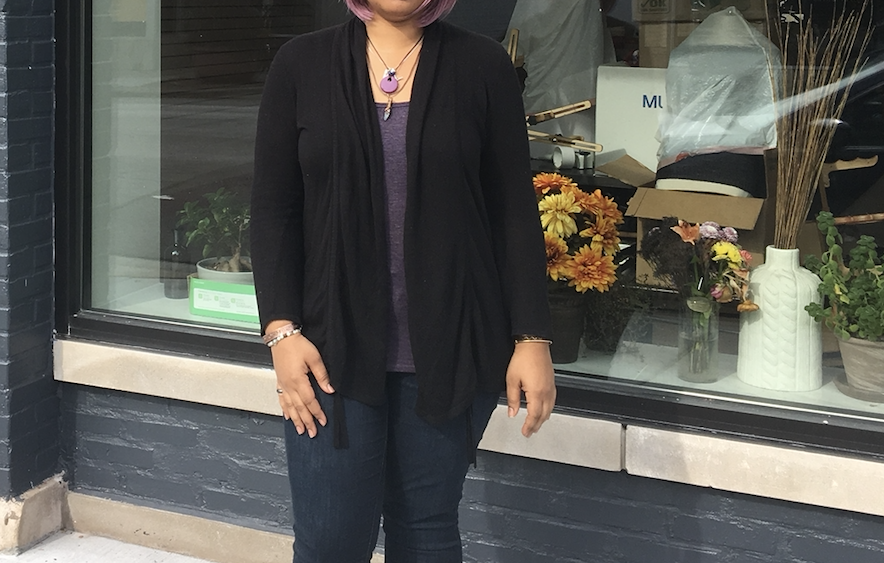 Chastity Dunlap was bitten by the knitting bug a dozen years ago when she found a woman on Craigslist who gave lessons in a local coffee shop. “Then when I moved to Forest Park, I discovered my first yarn store and loved it. I spent so much time there and soaked up everything I could. It was a wonderful atmosphere; I was so sad when it closed.”

Eventually, Chastity found a new “yarn home” in Downtown Oak Park and started working there on weekends. She ended up purchasing the inventory and taking over the space, and Dye Hard Yarns was born. Now, after two years in business on Westgate, Dye Hard Yarns is getting a new home at 210 Harrison Street in the Oak Park Arts District.

Although she had been knitting for years, it wasn’t until she took a class at Chicago’s local yarn convention (YarnCon) about four years ago that Chastity became hooked on dyeing as well. She has been dyeing in her apartment kitchen after her daughter goes to bed at night, but it is “really inconvenient.” In August, she had an epiphany and realized that her business had become focused on indie-dyed yarns—including her own brand called Kitty Pride Fibers—and that she needed her own studio space to take it to the next level.

Chastity was at first reluctant to move because she loved the “natural charm” of her space on Westgate with its cobblestone street and sunset view, but she figured it couldn’t hurt to look elsewhere and was won over by the bigger space and ease of parking on Harrison Street. Plus, her business is a natural fit for the Arts District, and she’s excited about the possibilities that offers. “I’m hoping to connect with other businesses to collaborate on community outreach and to make the Arts District part of a traveler’s must-see itinerary.”

Once she committed to moving, Chastity became really excited about what she could do with the new space. “I need studio space, but I’m not the only one in that situation. So many dyers at YarnCon are small like me and are looking for a dedicated space outside their home that is fully equipped where they can work.”

She is still working out the details, but Chastity envisions indie dyers paying a small monthly fee to join the studio and to be able to regularly use the space. It will also be available to people who want to pop in to dye something for their own projects and for students. In addition to dyeing classes, Dye Hard Yarns also offers classes in knitting, crocheting, and other fiber arts. “If it’s fiber-related and I can find a teacher, then I’ll offer it,” says Chastity.

While some classes are taught in groups, Beginning Knitting is a one-on-one lesson; it’s free as long as materials are purchased at Dye Hard Yarns. “My goal is to take you through your first project. The first lesson is one hour, and I want you to be fully comfortable before you leave.” Students come back at least twice, but Chastity assures them that they can work with her until the project is done. “Whether it takes a week or three months, they have me for that time.”

Subscription clubs are another way that Chastity spreads “the gospel of knitting.” The every-other-month shipments are available for either socks or accessories and include yarn, a pattern, a small gift, and a storewide discount. “It’s like getting happiness in the mail,” says Chastity.

Dye Hard Yarns also hosts Fiber Fun Night on Wednesdays when customers are welcome to work on current projects and socialize. Chastity is clear about what she wants her space to be. “The original store that I went to in Forest Park was so friendly and welcoming, and I have used it as a barometer of every other yarn store I’ve ever been in. I want my store to be like that, and I want to take it further if I can. I want people to feel like they can sit and talk or not talk and just be together. To feel like they’re a part of something and to get a feeling of calm in a very scary world.”